We currently have 5 Miniature Dachshunds living here with us and 3 boys who live with close family friends who are just as much part of the family.

The girls living here are: 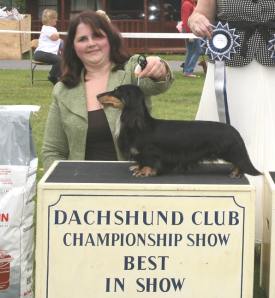 CH Abydachs Attitude JW – Beetle – 9 yrs, Beetle has a fabulous show career as a youngster winning 5 CC’s, 14 RCC’s and 3 BOB, she retired from main competition when she was 4 when she won Best in Show at The Dachshund Club Championship Show 2007 out of over 500 exhibits. She has since produced 2 fabulous litters of puppies. After 2 self whelped litters she is still easily under the UK weight limit of 11lbs. 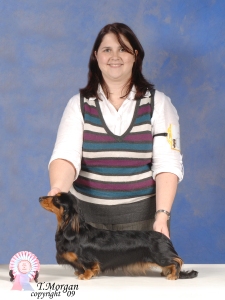 CH Abydachs Absolution JW – Wiggle – 5 yrs, Wiggle is Beetles daughter from her first wonderful litter sired by the gorgeous Silver Dapple CH Rafthouse Herr Flick. She was Top puppy 2008 and has since won 7 CC’s, 1 RCC and 5 BOB. She has taken a break from the showring to produce her first litter which are now 10 months old, she will be back in the ring in due course, weighing in as always just over 10lbs. Wiggle returned to the show ring in August 2010 and won Best of Breed at Paignton CH show, the CC at Midland Dachshund Club, CC and BOB at Midland Counties and LKA and finished the year joint 2nd Mini Long bitch after only attending 5 shows. Wiggle had her 2nd litter in April 2011 sired by IR CH Walpines Mozart. Her 2 daughters are now both Champions made up in 2013 (Ch A. Apparition and Ch A. Absolutely). 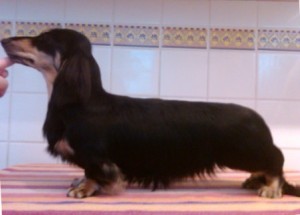 CH Abydachs Angelica – Jelly – 3 yrs and a quiet and loving girl, she won a RCC from the puppy classes and won her 1st CC at East of England CH Show in July 2010 and then her 2nd CC at SKC (August 2010), she won her crowning CC at Lancashire and Cheshire Dachshund Association CH Show. We are very proud of Jelly winning all her CC’s from Breed Specialists. Jelly will continue to be shown sparingly along with her half sister Wiggle. Jelly had her first litter in 2012, both these puppies are now in their forever homes. Jelly may be selectively shown during 2013.

CH Abydachs Apparition JW– Minstrel –  Minstrel is one of Wiggle’s daughters by Ir CH Walpines Mozart. Minstrel has had a cracking start to showing winning RCC and BP at Midland Counties 2011 at just over 6 months old. She has won her first CC and BPIB at Dachshund Club of Wales at just over 9 months of age. To continue her winning she also went Best Puppy in Breed and Best Puppy in Show at Miniature Dachshund Club Champion Show 2012. Reaching 13 months old Minstrel gets another RCC at SKC 2012, Mini won her 2nd CC at Border Union under Breed Specialise Lovaine Coxon, the another RCC at SKC. She also took the RCC at Lancashire and Cheshire Dachshund Club 2012, followed shortly after by her 3rd and crowning CC and BOB at Midland Dachshund Club 2012. This makes Mini our 5th Mini Long Champion and we believe the first Chocolate and Cream Champion in the UK. Mini will now only be selectively shown and will hopefully have her first litter during 2013 – details to follow.

Ch Abydachs Absolutely – Bubbles – Wiggle’s other daughter from her 2nd litter to  IR CH Walpines Mozart. Shown lightly during 2012 but hit 2013 with a bang winning her 1st CC at The Miniature Dachshund Club in February 2013. Hound Association of Scotland Bubbles get Best Bitch and Best of Breed. She will be campaigned throughout 2013.

The boys living with our friends:

Abydachs Lord of the Dance – Fudge, a beautful cream boy who is the sire of our recent mini long litter, he has sired some fabulous puppies but was never shown in the UK as he is slightly over the 11lbs weight limit. He has a wonderful personality and is loved to bits by Kim, Jonjo and Charlie who he lives with.

Abydachs Aftershock – Tigger, Jelly’s dark shaded red litter brother who we showed lightly as a puppy and did very well with. He is exactly what we want to breed in minis and a delight to live with, but as he grew a bit too big to be shown in the UK he went to live with some friends who had previously had a Standard Long from us. He is now incredibly spoilt but comes to visit us regularly as he is only 5 minutes away. Tigger has returned to live with us here at Abydachs as sadly one of his owners died and the other is now in a nursing home. Tigger has settled back here really well and is just as stunning as he was as a young dog.

Abydachs Audacity – Billy – Wiggle’s son from her first litter. Kim and Jonjo who own Fudge (Billy’s sire) wanted another puppy from us and as soon as we told them we had a red boy in the litter Billy was sold, we couldn’t ask for a better home for them and look forward to seeing how he matures.

These boys are not at public stud.